A lot of lists on Facebook about books right now. List ten books that stuck with you! Don’t think too hard! Just hit the first ones that come to mind! I did it. A good first list, but a flawed top ten no matter how you look at it. I left too many off. These deserve mention.

The White Mountains by John Christopher because I read it when I was twelve and I was so worried I’d never be able to find a copy of my own that I started copying out the pages.

Splinter in the Mind’s Eye by Alan Dean Foster because we didn’t have a bookstore in my hometown until I was a teenager. My bookstore was the drugstore book aisle and the shelves were packed with sci-fi. Alan Dean Foster was my favorite.

Shogun by James Clavell because it was twelve hundred pages of adventure.

Crime and Punishment by Dostoevsky because it was the first book I ever wrote in. I scrawled “Intense” in the margins during a scene in which Raskolnikov is questioned.

The World According to Garp by John Irving because it let me believe I could write.

The Bluest Eye and Beloved by Toni Morrison because she writes lyrically about ugliness.

The Things They Carried by Tim O’Brien because that last story/chapter completely changes what I thought the book was about.

The Barnum Museum by Steven Millhauser because, whoa.

To the Lighthouse by Virginia Woolf because everyone who dislikes this book says nothing happens. What are they talking about? Everything happens in this book!

A Walk Among the Tombstones by Lawrence Block because although it’s filed under mystery in the bookstore, this bloody book is literature, pure and simple.

Portrait of a Lady by Henry James because he writes such long sentences.

In Search of Lost Time (Volumes 1-3) because Proust writes even longer sentences and every single thing is important.

Crossing to Safety by Wallace Stegner because of that simple, killer last sentence.

Almost No Memory by Lydia Davis because what in the world is she up to, anyway?

Cloud Atlas by David Mitchell because the world is a puzzle.

Absalom, Absalom by Faulkner because its the exact opposite of Go Down Moses–two sides of one brilliant writer.

Plainsong by Kent Haruf because it’s the antidote for despair.

A Visit from the Goon Squad by Jennifer Egan because you’d never expect a story written as a powerpoint presentation to be powerful, but damn.

The Interpreter of Maladies by Jhumpa Lahiri because of her quiet amassing of details.

Hunger by Knut Hamsun because nothing will make you grateful for bread like this book.

Wolf Whistle by Lewis Nordan because in his invented town of Arrow Catcher, he finds all that is good and bad in the south.

Dante’s Inferno and Purgatorio because what could a Catholic poet from the 13th Century have to say to me? Everything, that’s what.

Palace Walk by Naguib Mahfouz because tell me you aren’t in the hands of a master.

The Story of Lucy Gault by William Trevor because of how that first sentence echoes throughout the entire novel.

The Hundred Brothers by Donald Antrim because it’s the single strangest book I’ve ever read but when I turned the last past, nothing strange remained.

To the Wedding by John Berger because how could a blind jewelry merchant in Greece tell the story of a young couple, one of whom has Aids, getting married far away even though he only met the couple once? Because Berger says he can, that’s why.

Enormous Changes at the Last Minute by Grace Paley because “Everyone, real or invented, deserves the open destiny of life.”

And still the list is incomplete! And I haven’t even got to the poets yet! Good lord, I’ll be here all day.  I have to get back to the book I’m reading. And prepare for the one after that. I need to do a list like this at least once a year. 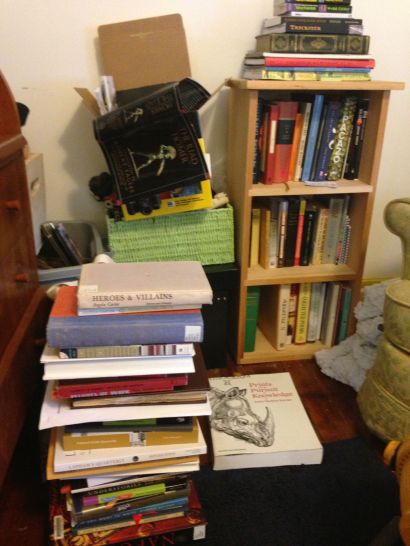