I’ve been on the organizing committee for the new union at my school. It’s the first time I’ve ever done such a thing. We won the union vote last night. 70% of the lecturers voted for the union. Of those who voted, 86% voted for the union. The final vote was 141-23. I wrote the members of the committee a letter and I thought I’d repost it below the photo. 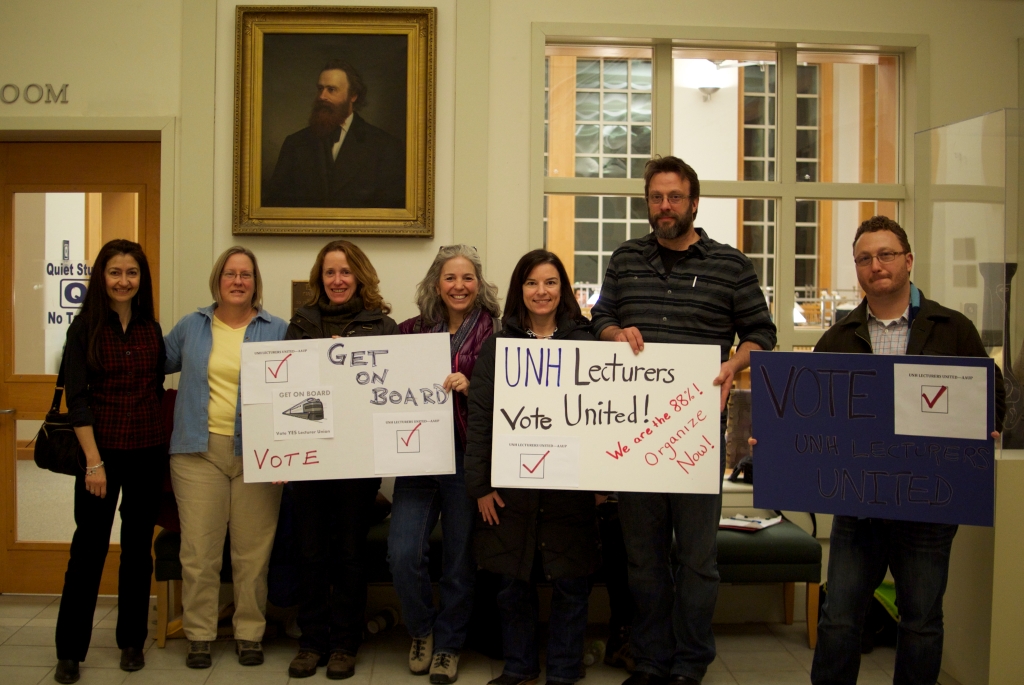 It was something watching those stacks of votes pile up last night, wasn’t it?

I’ve never been involved in anything like this before. I’ve always believed in the idea of unions and supported them in the abstract, but I’ve never been in a situation where I could be a part of one, let alone be a small part of organizing such a thing. When Nancy caught me last summer after yoga and bought me a popsicle to keep me from running away while she asked me to come to the next OC meeting, I didn’t really know what I was getting into. Even after I came to the meeting and decided to join, I wasn’t quite sure. It just felt like the right choice to make. In fact, it was undeniably the right choice to make, but that wasn’t clear at the time. So much of the organizing campaign was about learning how things work. Every meeting I went to–even when I left feeling more flummoxed (yes, flummoxed–I had to sneak that word in here) than when I went in–was a learning experience. There were times that I felt I didn’t have much to add to our conversations, because I had to learn the way things were. This union campaign wasn’t me supporting the notion of unions in the abstract, it was me figuring out what collective action meant in the concrete.

What it turns out to mean is simply this: people. For fifteen years, I’ve been in my little English Department bubble. I come in, I teach, I go home. I park in the same place, I teach in the same rooms. I know the English department lecturers, mostly, but I don’t think I knew any lecturers outside of my department at all. All those emails about the lecturer council, social events,  and campus activities–all of those sailed right past me because I was in the bubble. That’s such a strange thing to admit–because it’s not how I live the rest of my life. The rest of my life feels full of people, contacts, community. But not my work. At work, I was mostly isolated from about 90% of the people who have the same job I have. That strikes me as sort of sad, so I’m glad it is something that is being rectified.

I’ve never felt more apart of the UNH world than I do today–as I did last night watching the vote count. This organizing process will now rank among the most important experiences of my life. And although I’ve sat back a bit this semester in terms of my activities, I wanted to acknowledge how awesome it has been to be a part of this–to meet all of you, to witness Emilie’s fiery spirit, Israel’s ocean of knowledge, Sarah’s steady leadership, Kira and Christopher’s organizing passion, and everyone else too–the way our group of wildly different, incredibly smart, talented individuals came together to make this happen (and by “this”–I mean steamrolling our opponent). I know it’s not over and I know I have a lot to learn still, but I’m glad to be on the trip, glad to know all of you. I know that together we can make a difference.

And a special thanks to Nancy who got my attention the only way that could have possibly worked: with frozen juice on a stick. Without her reaching out to me, I’d still be in that bubble. Walt Whitman wrote that “All goes onward and outward, nothing collapses”–and I look forward to moving onward and outward with you all.