A bit of advice on persistence in writing from William Kennedy, author of, among many other books, Ironweed, Very Old Bones, and The Flaming Corsage. If I can sum up what Mr. Kennedy says in eight words, it would be: Put your ass in the chair and write. 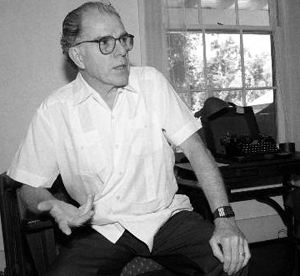 I used to say  on Thursday afternoons when I was on my day off from the Albany Times Union and I was waiting for the muse to descend and I discovered that it was the muse’s day off too: you have to beat the bastards. I didn’t even know who the bastards were, but you have to beat somebody. You have to beat your own problematic imagination, to discover what it is you’re saying and how to say it and move forward into the unknown. I always knew that a). I wanted to be a writer and b). if you persist in doing something, sooner or later, you will achieve it. It’s just a matter of persistence–and a certain amount of talent. You can’t do anything without talent, but you can’t do anything without persistence, either. Bellow and I once talked about that. We were talking just in general about writing and publishing and so on, and he said there’s a certain amount of talent that’s necessary. After that, it’s character. I said, What do you mean by character? He smiled at me and never said anything. So I was left to define what he meant that night. What I concluded was that character is equivalent to persistence. That you just refuse to give up. Then, the game’s not over. You know, I had an enormous success in everything I’d done in life…up until the time I decided to be a writer. I was a good student; I was a good soldier; I was good at this and that. I got a hole-in-one one day one the golf course. I bowled 299, just like Billy Phelan. I was a very good newspaperman. I became a managing editor. Anything I wanted to do in journalism, it seemed to work; it just fell into place. So I didn’t understand why I was so successful as a journalist and yet zilch as a novelist and a short story writer. It was just that time was working against me. You just have to learn. It’s such a complicated craft…such a complicated thing to understand what you’re trying to bring out of your own imagination, your own life.