Last week scientists were able to photograph this:

Here is my interpretation of said event:

Doodles in a Moleskine.
Searching out a creative space.

But Dubstep is what the kids call it now. A bit of sonic and physical strangeness. Haunting, really. The guy must have leg muscles like steel wires. I don’t know why this thought struck me, but: if this guy is still dancing when I die, I’d like him to come do some dubstepping at whatever memorial/funeral there is. Just alone in a room, this guy and some trance-y music. It shouldn’t be explained, either. Just put him a room and put a velvet rope across the doorway so no one goes in there. Let him do his thing. And if that gets too serious, then people can walk over to the Simpson’s room and laugh for a while. I can think of nothing better than to have Ralph Wiggum saying, “I bent my wookie” and this android-dude dubstepping at a memorial service.

How to let the creative day happen? I’ve been known to let all sorts of things get in the way of my creative time. Some of it is procrastination, but often not. Family, work, community involvement–good things that need to be attended to. For a long time, I expected something different of myself. I didn’t want to be Cezanne, running off to Tahiti, abandoning my family, living only for my art, but I think I did get it into my head that I deserved some special treatment, some specific quiet and reserved time in which I could create my expected masterpieces (there is that tricky word again, expect… Oh, how my expectations have dogged me). Turns out that any special, specific creative times must not come at the expense of any of those things most vital to life. I must be willing to steal a creative moment at any time, even in the midst of a crowded house, on a workday, while waiting to go and pick up my daughter at soccer practice. Today, I put off grading student papers to get creative time into my day early. I can always grade papers later in the day. I took a Bikram yoga class this morning. I came home feeling like a rubber band. I dreamed my way into a creative afternoon:

I worked in each of these journals.
The big notebook is Apocalypse Nation, part two. Over a thousand words down today.
The small notebook in the foreground is a daily journal. I predate each page. Knowing that I’ve already dated the book makes it more likely that I keep up the practice.
The moleskine on the left is a graphic representation of my last manuscript, The Aurora Project.
The moleskine on the right is walking around notebook. The doodle I’m working on here is called “collision” and is inspired by the recent photos of galaxies colliding.

Looking at creative spaces. When the words are difficult to come by, allowing myself to explore in other ways. Thinking about creating without expectation. Trying to enter the creative space without defining the creative space. Focusing on the creative space in the moment, not in tomorrow or the next day. How many times have I attempted to create while managing the expectations of a creative life at the same time? Countless times. Always. How and where I will publish, who will read and like my work, how I’ll spend my advance money. Where did the expectations take me? Toward not creating. While writing ApocalypseNation, I have been nurturing expectations. I’ve spent much time wondering what it meant for me to be writing a zombie novel and what I should expect by the end result. It kept me from actually writing the darn thing! It was supposed to be fun book to write, but it became drudgery.

I wish this was a lesson I could teach myself once and retain. But each creative endeavor requires that I trudge the road of creative destiny again from the beginning. Today, I’m doodling in my moleskine while waiting for students to come talk to me about writing. Later, I’ll write. 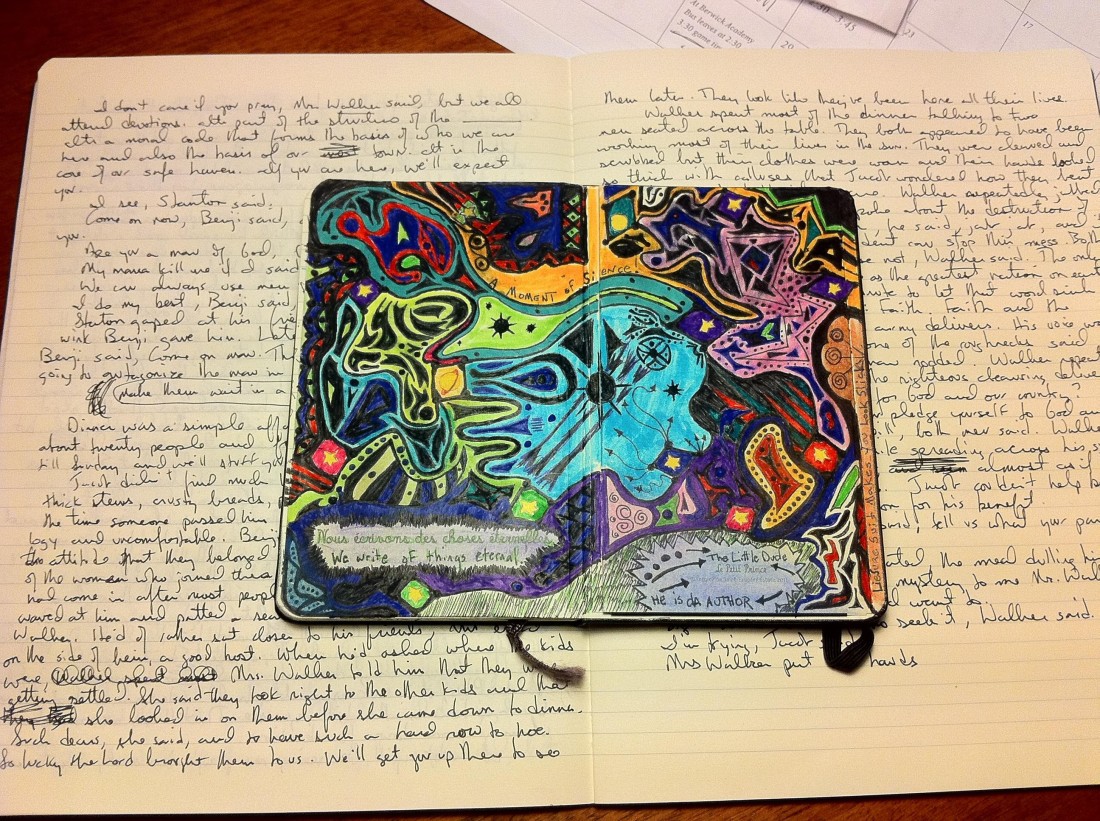 Vote Quimby. Sent from my iPhone

Once, years ago, when I was the director of production at the Music Hall in Portsmouth, NH, Mel Torme came to sing.

I joked for weeks about the upcoming show. Just another has-been, I said. Another crooner subjected to touring small theaters rather than face the indignity of not singing. A relic from a long lost era singing from an American songbook that no one cared about.

In hindsight, my myopia is surprising. I’ve always been open minded about music. About everything, I would hope, but about music in particular. I had expectations about Mel Torme that had little or no connection to anything tangible. He was just an old singer and I remember hearing about him on the TV show Night Court. Had I ever heard him sing? No. Did I even have a concrete image of the man to make fun of? Not at all. But for weeks I made jokes about the Velvet Frog. I croaked out raspy imitations of the man though I didn’t know anything about him.

On the other hand, we were professional and made the theater sparkle for him. Sold out of tickets. Took the green-room and turned it into a large, sumptuous private dressing room. Did everything we could in preparation for his arrival. It was to be the biggest show of the year, a substantial fundraising event for our perpetually underfunded theater.

And Mr. Torme surprised me. Subverted my expectations, as it were.

He arrived in his limo and it was immediately apparent that he might have been senior, but he was not old. He wore a sleek velour track suit and and walked crisply into the theater. I was there to greet him.

Welcome to our theater, Mr. Torme, I said, we’re so happy to have you here.

Thank you, Mel Torme said. Who do I see about getting paid?

Consumate professional. No funny business. Sharp as a tack. When Mel Torme spoke, people moved. I got him his check.

About a half hour later, he came out for soundcheck. I’d already undergone a shift in regards to my thinking about Mel Torme, but I became a fan during the soundcheck. He came out and picked up the microphone from the stool near the downstage lip and started singing. There was no hesitation, no reticence to sing, no tapping of the microphone to see if it was live, no test-one-two. Nothing but song. Here was a man used to having things work. He supplied the energy and the voice and expected the people around him to supply the nuts-and-bolts. He sang a song or two and said thanks to his band and to the sound crew and then went back to his dressing room. No muss, no fuss. He’d been paid and he was ready to sing.

The show confounded all of our expectations.

No one expected the rabid fans. I’d been to and worked a great deal of shows and seen just about every type of crowd imaginable, from the sedate to the out of control. Torme fans tipped toward the out of control. Here were people mostly my parents’ and grandparents’ age, but if you closed your eyes and listened to the roar of adulation and applause after each song, you’d of thought the crowd to be made up of teens swooning for the Beatles. Even Mel Torme was taken aback, visibly shocked and nearly overwhelmed by his reception.

And what in the world made me think that he was some sort of hack? Contempt prior to investigation, most likely. He’s just an old guy singing old guy songs, right?

It was a long time ago, and I don’t remember the set list, but he sang jazz standards. More accurately, he sang the hell out of his setlist. Seven years I helped produce shows at this theater. When people ask me who my favorite shows were, this one is at the top of the list.

The crowd was so hungry for Torme that he did not one, not two, but three encores. When he came off the stage after the second encore and the crowd was showing no signs of quieting, he turned to my stage manager and said, “Jesus, what a crowd.”

After the show, he was warm and cordial and genuinely surprised by his day. Maybe we subverted his expectations as well. A crowd of about twenty people waited outside the stage door. He didn’t rush through that crowd either. He shook hands and talked to everyone. As he was getting ready to climb into the limo, a woman, still high from the concert experience, still full of song, started singing to Mr. Torme. At any other time, I might’ve thought it a bit embarrassing–for him and her. But here was a man that had upended my thinking throughout the day and was about to do it one last time. The woman’s voice was clear, tuneful, but not especially lovely. And Mr. Torme just listened. He let her sing. There was no one else in the alley at this point, just the singer and Mr. Torme, poised by the limo door. He let her sing until she stopped, never rushing her or looking at his watch or rolling his eyes. And then he took her hand and said, “That was beautiful, darling, just beautiful.”

Here’s a video of the man singing Stardust:

Beautiful day out. This song makes it all more fun. I think it’s the whistling that does it. Who doesn’t love a song with whistling?