My friend Jon Travis died last night. I don’t think he’d mind me just blurting it out like that. He wasn’t one to stand much on ceremony. He wasn’t fancy, although he had good taste. We weren’t lifetime friends, but it sure felt like it. I met him through a friend. She brought him to the Music Hall, my old theater, in 1993. He wanted a job and I didn’t have a job to offer. But he kept hanging around. Sometimes he would come even though I couldn’t pay him. Sometimes, I’d have him on a show crew and he’d bust his ass with the rest of us trying to put on a show for small money. Finally, he became my stage manager. It just happened. One day I looked up and he was there at the stage manager’s stand and it was like he was supposed to be there, or like he’d always been there and I just never noticed. We’d had good stage managers before Jon, but Jon brought something special to the job. He didn’t buy trays of cold cuts for performer food; he made fresh sushi and gourmet salads. He didn’t run cheap coffee through our old machine; he brought in a cappuccino machine and handed out frothy espresso drinks. He was grouchy and difficult sometimes too and just when you’d think he was going to flip over something, he’d bust out a killer Ethel Merman impersonation as he was climbing the stairs to the flyfloor to heft sandbags and lead weights to balance out the lights and scenery on the pipes. When Gail and I got married on the Music Hall stage, he stage managed the wedding. He cared about that building. For several years, the place couldn’t have run without him. He needed us, but we needed him more. Or maybe I needed him. He wasn’t afraid to be the “bad” cop when I was the “good” cop for shows. In fact, I think he sort of liked it. Now that he’s gone, I feel as if I still need him.

Other things: I was in his wedding party where him and his wife Cathy asked me to read “Oh, The Places You’ll Go” by Doctor Suess as part of the ceremony. He loved pub rock, especially the Reducers. Jello Biafra once spent the night on his apartment floor. He’d seen hundreds of shows, bands that most people never heard of but who Jon loved. We went to see the Tragically Hip together at least a dozen times. Man, did that guy love the Tragically Hip. I think that was my one big gift to him, turning him on to that band. We played the Hip so often that most normal people would have gone insane. Once, early in our friendship, as we drove back from a late night load out of a Nutcracker in some high school hours away, we listened to the Hip cd “Day for Night” over and over, very loudly. We sang and sang and sang to that album. We analyzed the songs. We somehow connected over that band. Another time, the Hip came to our theater. We were giddy. When the Hip were doing their soundcheck, Jon went into the dressing rooms and took a shower. Later, when we met Canadian Tragically Hip fans at other concerts, Jon loved telling them that he once sang in the shower along with Hip as they soundchecked. It was the little things, really.

Of course, Jon’s gift to me was his warm and true friendship. He was easily annoyed by much, but he never seemed annoyed with or by me. He was always glad to see me and I him. I hadn’t seen him too much over the last few years, but that is normal, I suspect. We both were married and had full lives. We’d been talking quite regularly recently, thanks to facebook. He was a tremendous artist. Here is a link to his art:

As I worried about my writing, Jon would tell me just to write something. He practiced what he preached in his own art. Just make something.

When I worried about my teaching, somehow convinced that what I did wasn’t important, he said: “That’s the difference between what you do now as opposed to what you did at the Music Hall. There, it was instant gratification. You got the audience reaction and you knew the show was good and your performance was validated. But teaching, you never really know. You just have to trust that you are getting through to someone.”

He believed the same thing about art. I have a painting of his over my desk of a still of Robert Mitchum from “Night of the Hunter”. Here is the original still: 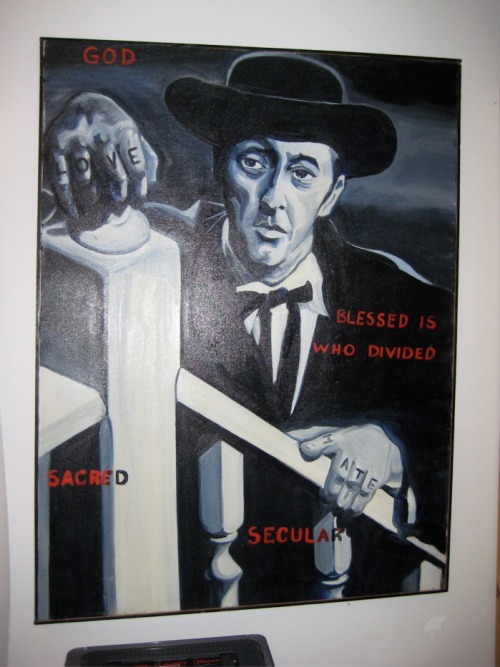 I think I’ll have more to write about this, but tonight I was just feeling his loss. Now that I am typing the images and memories are blurring together. The last time I saw Jon was about four months ago. We went to see the Tragically Hip together in Boston. He became fast friends with a bunch of drunk Canadians. We had to stand the whole time and Jon was tired, but it didn’t stop him from putting his whole body into the music. Perhaps the Hip song that comes to mind for me most right now is titled: 100th Meridian. Towards the end of the song, the singer sing/chants these lines: If I die of vanity/Promise me/Promise me/if they bury me/Some place, I don’t want to be/You’ll dig me up/And transport me/Unceremoniously/Away from/The swollen city-breeze/Garbage-bag trees/Whispers of disease/And acts of enormity/And lower me/Slowly, exactly and properly/ Get Ry Cooder/ To sing my eulogy/ At the hundredth meridian/ Where the great plains begin.

Jon, along with the rest of the Hip crazed crowd would go crazy just about the time the Ry Cooder line pops up… all of us bouncing up and down to the song. It’s a good memory of the man–passionate, a bit crazy, artistic, loving, grouchy, friendly, real. Wherever Jon is, I know he’d want Ry Cooder to sing his eulogy. And I love him for that. And all the other things. I miss him.