Our house began as a one room building, perhaps a tenant farmer dwelling or a storage shed on the back forty. By the time we purchased the property, the house rambled like a good old farmhouse should. There were many structural problems. It seemed that the entire place was mere moments from falling down. Every wall, every sill, every pipe, every wire—trouble. Only the floors and foundation seemed sturdy. The foundation is made of massive fieldstones and slabs of granite hauled into place by teams of horses.

We bought the house in March of 2005, during my last semester at Bennington College, where I was working on my MFA. Though warned about the quantity of work, we were completely overwhelmed by the task. Really, nothing could have prepared us. Nor, do I suppose, could anything have deterred us. One day, as I was down on my knees pulling plaster and lathe from studs, I discovered a stretch of horrible termite damage. This was nothing new. The house had been chewed on by all sorts of fantastic bugs and rodents. But on this day, the sight of more distress caused me to panic. How could we renovate this entire house when every inch needed attention? I felt massively under-qualified for the task: a pretender, a phony, a fraud. And yet we’d already gone too far to turn back. What else was there to do but move forward? I could only do the work in front of me in the best way I could. Chop wood, carry water—as the saying goes. That panicky moment was a turning point. Whenever I felt hopeless about the house’s condition, I’d go down into the basement to look at the old stones, run my hands over their sheer immovable bulk.

A similar chronology occurred in my writing life—which one might say began as a one room structure: Yes! I want to be a writer! As I got older, read and studied more, I found that the original “room” or desire had grown complicated and unwieldy. To be a writer, one had to write. But to call oneself a writer, one didn’t have to do anything. I could scribble a few words in a notebook, or read lofty novels that dealt with the pain of existence, but I certainly didn’t have prove that I was a writer. Then, as I was approaching thirty, I had a panicky “oh, no…this is too much work” moment in which I realized that my desire to write had become a vague longing. So, I made a decision to try an earnest practice of the craft.

I spent my thirties learning about stories, both reading and writing. My writing was published in good reviews and journals. I wrote two novels (one, supremely bad, is now hidden away, and another, pretty decent, is in limbo). I earned two graduate degrees. We started a family and bought our houses. As a writer, I still felt massively under-qualified for the task: a pretender, a phony, a fraud. Sure, a few stories here and there, but what does that mean? Where’s the fame? Where’s the novel contract? Where’s my table at the Pulitzer Party with Norman Mailer bugging the waiter for some decent scotch? Where’s my Oprah interview?

These are the sorts of questions that kill writers. I let them in the door. I swam around with them, lamented that I hadn’t become the writer I imagined. Perhaps most devastatingly, I stopped writing. I’d been working on a third novel, a risky tale of human renaissance that took place over nearly eight thousand years, but I’d stalled. I worried more about not writing than actually writing. But I’d already come too far. What else was there to do but move forward? In July of 2008 I was notified that I’d been awarded the Individual Artist’s Fellowship. The fellowship was more than mere “recognition.” It was cause to reassess my writing life, to look over what I’d been doing, to see if there was something salvageable—to see if there was a foundation. 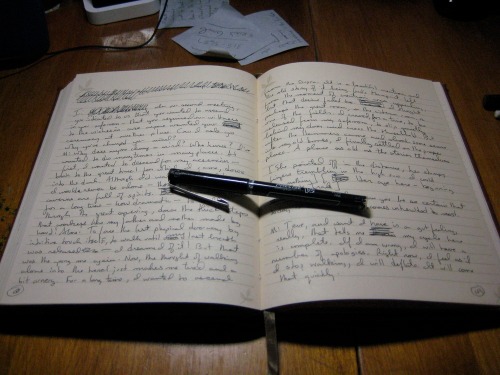 This past December, I made a big change. To break the cycle of “not writing,” I removed the computer from the desk and took out a notebook and pen and I got back to work, writing the last section of my novel longhand. I’ve never written fiction longhand. Even at a young age, I typed. Now, as I renovate the last section of the book, and work toward a complete picture, I feel the words in my fingers, pressing against my palms. Of course, the writing is rough and the going slow, but I am determined to work carefully and diligently, as I’ve tried to do in my home, from the foundation up, until the structure is as sound as the old fieldstones supporting the weight of it all.

The weather today reminds me of the day that we came to look at our house. It was zero degrees outside and the house had been empty for two years and it was zero degrees inside too. But still, something about the wrecked, creaky old building resonated with us. We walked from the basement to the attic, feet freezing, looking at all the damage and all the potential. Of course, we didn’t know the extent of the damage or have any idea of how distant that potential really was. Maybe our brains were clouded by the cold. Or maybe it was just a “right place right time” type of thing. Whatever the case, we bought the house and got to work.

Nearly four years later,  it is a few degrees warmer outside and about sixty five degrees warmer inside. I’m in the office sitting at a writing desk that overlooks the road, the old oak, and the white plank fence. The floor in here bears the marks of working people–chisel marks on the floor, rough cut boards, divots and saw marks–as does the rest of the house. The people who built this house were not contractors. They were most likely farmers, or hired hands, and they built the house in sections, from one room to the next, and incorporated other buildings under its roof and wasted little, pulling boards from other structures where they could . Last week, I uncovered a twenty four inch wide, one inch thick, hand cut barn board from the last room to be renovated. The men cut these planks using a pit saw–literally what it sounds like: they dug a pit and one man stood in the pit and one man stood above. They shared ends of a very long, sturdy saw and hand ripped each massive trunk into usable boards. Hard work, no matter where you stood. The whole house bears witness to labor of one kind or another. In the cellar is an old canning room and a cistern for storing water. The floor joists still have the bark from the trees. The ceiling beams in the living room were hand cut with hatchets and awls. We’ve added our own labors to the mix. The walls here are used to the sounds of heavy lifting.

Although it doesn’t have the sheer back-breaking quality  of  working a pit saw, I’d have to say that my life as a writer is all about heavy lifting. I’ve never been the sort of writer who found words easily accessible. There is always the daunting process akin to digging the pit and climbing into the hole and working the bottom of the saw in hopes of crafting a usable section of lumber. Many of my students are dismayed to hear that after so long practicing the craft that the process grows no easier. I’m not sure they like to hear me say: It’s all about the work. You really have to get in there and get your hands dirty. There is no acceptable shortcut. Not to those authentically called to the profession. So I feel at home now when I write in this house. When I’m not renovating the next room, I’m renovating my fiction. In fact, it is in the renovation that I find fiction. Without the hard labor, it is simply prose, without attachment to imagination. I certainly wish the writing was easier for me, that I could be one of those prolific writers that seem to easily glide along the current, but I have proven to myself that it is not so and most likely never will be. I have to force myself to sit at the table and write past each failed sentence until I find the path to the right story.

Recently, I was awarded an Individual Artist’s Fellowship by the New Hampshire State Council on the Arts. Each year they recognize five artists from the state and award them for their efforts. This year, I was so honored. As a requirement for the Fellowship, I’m required to offer a report to the New Hampshire Community, and this site, which I’m titling “Work,” will serve as my report. I will be coming here every week or so, and reporting to my community about my activities as a writer. Although I don’t want to pick apart the artistic process to try and discover the source of its mystery, I will comment on the work as it appears before me. Although I won’t give blow by blow accounts of the novel I am writing, I will attempt to peel back the covers a bit, to perhaps show a non-writing audience (or a writing audience for that matter) what is at stake as I try to access what E.M. Forster called the “creative state.” In that state, Forster wrote, a writer can call up something “normally beyond his reach.” I’ve always found that creative state illusive and a bit tricky to pin down. Perhaps by focusing on the nuts and bolts of the work, the heavy job of lifting that I am called to do on each page, I will find the door into my creative self more open upon approach.

I look forward to sharing this report with my community. I would like, at the very start, to thank the very wonderful people at the New Hampshire Council on the Arts, and the entire New Hampshire State Government for their support of a broad range of artistic endeavors, and for their specific recognition of my work. Until next time…